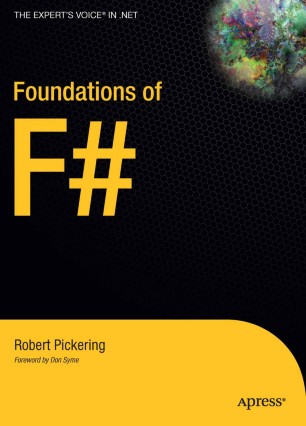 Functional programming (FP) is the future of .NET programming, and F# is much more than just an FP language. Every professional .NET programmer needs to learn about FP, and there's no better way to do it than by learning F#, and no easier way to learn F# than from Foundations of F#.

If you're already familiar with FP, youll find F# the language youve always dreamed of. All .NET programmers will find F# an exciting real-world alternative to C# and Visual Basic. This book is likely to have many imitators, but few true competitors. Written by F# evangelist Rob Pickering, and tech reviewed by F#'s main designer, Don Syme, this is an elegant, comprehensive introduction to all aspects of the language and an incisive guide to using F# for real-world professional development. F# is the future of programming (not just on .NET), and the future is now.

Robert Pickering is an extraordinarily prolific writer on F#. The F# Wiki on his website, Strangelights.com, is among the most popular F# web sites in the world. He is a consultant for LexiFi, lives in France, and works on projects in England, Denmark, Holland, and Belgium. He received his bachelor of science degree in computer science from Manchester University in 1999.