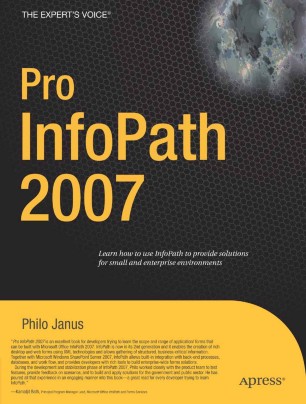 Pro InfoPath 2007 is an excellent book for developers trying to learn the scope and range of application forms that can be built with Microsoft Office InfoPath 2007. InfoPath is now in its second generation and it enables the creation of rich desktop and web forms using XML technologies and allows gathering of structured, business-critical information. Together with Microsoft Windows SharePoint Server 2007, InfoPath allows built-in integration with back-end processes, databases, and work flow, and provides developers with rich tools to build enterprise-wide forms solutions.

During the development and stabilization phase of InfoPath 2007, Philo worked closely with the product team to test features, provide feedback on scenarios, and to build and apply solutions for the government and public sector. He has poured all that experience in an engaging manner into this booka great read for every developer trying to learn InfoPath.

Philo Janus is a senior technology specialist with Microsoft. Over the years, he has presented InfoPath to thousands of users and developers, and assisted with enterprise implementations of InfoPath solutions. With that background, he is particularly sensitive to the difficulties users and developers have had with InfoPath. He graduated from the U.S. Naval Academy with a bachelor of science degree in electrical engineering in 1989 to face a challenging career in the U.S. Navy. After driving an aircraft carrier around the Pacific Ocean and a guided missile frigate through both the Suez and Panama canals, and serving in the U.S. Embassy in Cairo, a small altercation between his bicycle and an auto indicated a change of career (some would say that landing on his head in that accident would explain many things). Philo's software development career started with building a training and budgeting application in Access 2.0 in 1995. Since then, he's worked with Oracle, Visual Basic, SQL Server, and .NET building applications for federal agencies, commercial firms, and conglomerates. In 2003, he joined Microsoft as a technology specialist evangelizing Office as a development platform.