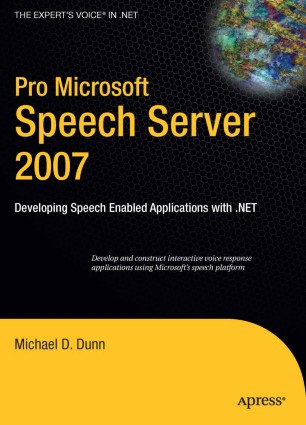 Microsoft Speech Server is becoming increasingly popular. There are three primary components developers wanting to develop speech applications need to be familiar with: the Speech SDK, Telephony, and ASP.NET server controls. Each of these can be used independently, but in many cases, all three need to be used to build truly compelling applications.

Pro Microsoft Speech Server 2007 walks intermediate to advanced developers through the basics of speech and telephony technology. It then addresses Microsofts specific implementations and what it can do for most companies. From there, the specific components are discussed individually in depth. You'll create an application from scratch, building upon an existing web site, but adding brand new functionality as well. All of the issues associated with setup, security and administration, development, debugging, and deployment are included in the walkthroughs.