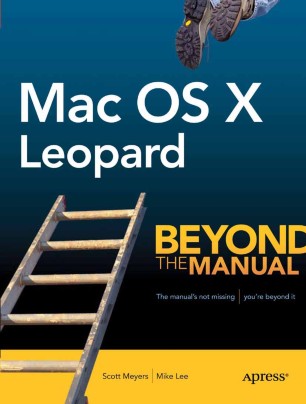 Good computer books make assumptions about the reader: what they do and don't know when they pick up the book, and what they want to know when they put it down. For each reader this could be very different; therefore, a book that suits one person may not be the best for another. Mac OS X Leopard: Beyond the Manual makes some assumptions too, ones that tend to differ from other Mac OS X books.

First of all, we assume that you have used a computer in that past: that you know how to use a mouse and you know the proper place to stick a DVD to get it to play in your computer. We won't be showing you these things. (We will, however, demonstrate to our Mac converts how to “right click” on a trackpad with only one button!).

Second, we assume you know what you want to do with your computer. We won't waste your time showing you specifically, step–by–step how to order a pizza from Pizza Galaxy in Milwaukee, Wisconsin with Safari (though, when you're done with this book we think you'll be able to do this just fine… if such a place exists, anyway).

If this sounds like you, then we think you'll find this book rewarding.

Inside you will find everything you need to get up to speed with Mac OS X Leopard including:

Mike Lee, the world's toughest programmer, is the founder and chief executive officer of United Lemur, a philanthropic revolution disguised as a software company. Mike has had a role in creating many popular iPhone applications, including Obama '08, Tap Tap Revenge, Twinkle, and Jott. Prior to iPhone, Mike cut his teeth and won an Apple Design Award at Seattle-based Delicious Monster Software. Mike is a popular blogger and occasional pundit, and has been seen on Twitter as @bmf. Mike and his wife are originally from Honolulu, but live in Silicon Valley, where they are raising two cats. Mike's hobbies include weightlifting, single malts, and fire. Mike can be contacted at mike@unitedlemur.org.

"Chapters illustrate the basic features of Leopard using screen shots and table listings of commands … . I would recommend this book as a good starting point for someone who wants to find out about the development tools available in Leopard." (P. Spoerri, Computing Reviews, Vol. 50 (1), January, 2009)