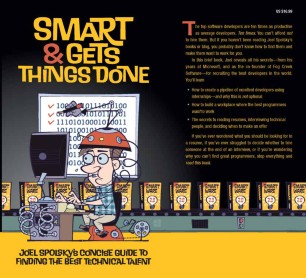 Smart and Gets Things Done

A guide to attracting, recruiting, interviewing, and hiring the best technical talent.

The top software developers are ten times more productive than average developers. Ten times. You can't afford not to hire them. But if you haven't been reading Joel Spolsky's books or blog, you probably don't know how to find them and make them want to work for you.

In this brief book, Joel reveals all his secrets—from his years at Microsoft, and as the co–founder of Fog Creek Software—for recruiting the best developers in the world.

If you've ever wondered what you should be looking for in a resume, if you've ever struggled to decide whether to hire someone at the end of an interview, or if you're wondering why you can't find great programmers, stop everything and read this book.

Joel Spolsky is a globally recognized expert on the software development process. His web site Joel on Software (JoelonSoftware.com) is popular with software developers around the world and has been translated into over 30 languages. As the founder of Fog Creek Software in New York City, he created FogBugz, a popular project management system for software teams. Joel has worked at Microsoft, where he designed Visual Basic for Applications as a member of the Excel team, and at Juno Online Services, developing an Internet client used by millions. He has written two books: User Interface Design for Programmers (Apress, 2001) and Joel on Software (Apress, 2004). Joel holds a bachelor's of science degree in computer science from Yale University. Before college, he served in the Israeli Defense Forces as a paratrooper, and he was one of the founders of Kibbutz Hanaton.

"Programming-employment decisions are a critical managerial process. … Spolsky asserts that ‘the real trick to management is to make people identify with the goals you’re trying to achieve.’ … Spolsky concludes with the self-designed ‘Joel Test,’ which rates the quality of a software team. … Managers, recruiters, and programmers will enjoy this easy read." (Brad Reid, ACM Computing Reviews, September, 2008)