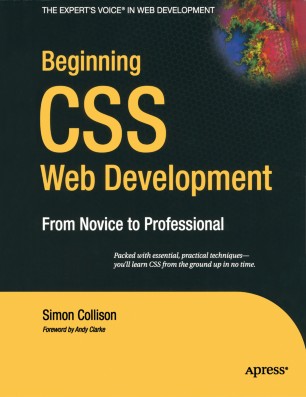 From Novice to Professional

Cascading Style Sheets (CSS) are one of the most important technologies on the web today. They give web developers the power to style their web sites so those sites are usable, compact, good looking, consistently displayable, and quick and efficient to change if so desired.

There are many books out there on CSS, but Beginning CSS Web Development is different—it doesn't waste time discussing theory, and it delves straight into the practical matter. It provides you with what you need to know, faster. It is also completely up to date, covering the most modern CSS standards and design techniques.

In addition to the essential CSS basics, this book covers advanced techniques like accessibility, hacks, and filters. The book concludes with a case study, and features a CSS reference section that allows you to look up required syntax as quickly as possible.

In October 2006, Simon Collision started Erskine Design based in Nottingham, U.K. which grew to become an eight-strong team of creative web designers and developers who are afraid of nothing. Some people say they're one of the best agencies out there, and their clients include major magazines, government stuff, software companies and polar explorers. Moons ago, he was a successful visual artist, and founded an independent arts org and annual arts festival, putting his degree to some use at least. Then he caught the interwebs bug. As lead web developer at Agenzia from 2002 to 2006, he worked on numerous web projects for major record labels (such as Poptones, Universal) and bands (including The Libertines, Dirty Pretty Things, Beta Band), visual artists and illustrators (Jon Burgerman, Paddy Hartley, Lucy Orta, NOW Festival), businesses, community, and voluntary sector orgs, passionately ensuring everything was accessible and complied with current web standards. He does a bit of public speaking here and there, and will generally do anything for a biscuit and cup of tea, but prefers hard cash. He has lived in many cities, including London and Reykjavik, but has now settled back in his beloved Nottingham, where the grass is green and the girls are pretty. He also drives a 31-year-old car, and has a stupid cat called Bearface.