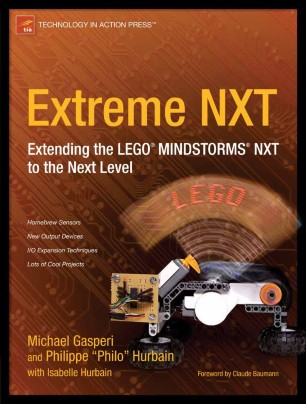 Extending the LEGO MINDSTORMS NXT to the Next Level

Extreme NXT: Extending the LEGO MIDSTORMS NXT to the Next Level is for intermediate-level users of NXT who would like to advance their capabilities by learning some of the basics of electronics. Plenty of examples are provided, and easy-to-follow instructions are included for building over 15 different sensors.

This makes a great reference for the NXT hardware interfaces. Examples even come complete with multiple, alternative NXT languages. The book is also abundant with illustrations.

Philippe Hurbain got his first Mindstorms kit in 2000, and soon his electronics background pushed him to build new and original sensors for the RCX. His web site shows how to build these sensors and includes a lot of technical information on the original Mindstorms kit. In 2006, he was selected as a beta tester for the new NXT that he received several months before the official release.