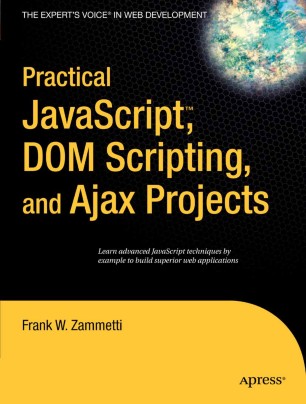 Practical JavaScript, DOM, and Ajax Projects is ideal for web developers already experienced in JavaScript who want to take their knowledge to the next level. It presents 10 complete example projects for you to learn from and adapt for use in your own work.

The book starts with a quick recap of the fundamentals of modern JavaScript development before moving right along to the applications. For each application, you are taken through the planning, design, and implementation stages. Theres something for everyone herea utility library, a validation framework, a GUI widget framework, a dynamic event calendar application, a drag-and-drop shopping cart, and more!

Over the course of the book, author Frank Zammetti covers JavaScript best practices, Ajax techniques, and some of the most popular JavaScript libraries, such as Prototype, Script.aculo.us, and the Yahoo YUI. One of the main premises of this book is to help you learn by example so you can then apply your knowledge to your own projects. This book will save you countless hours of development time and help further your JavaScript knowledge!