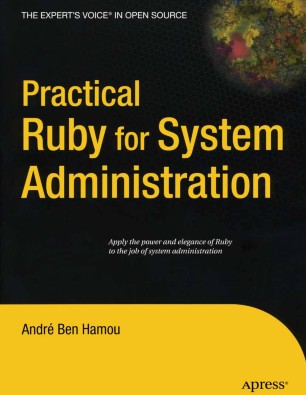 Ruby has set the world on fire, proving itself a serious challenger to Perl and Python in all spheres. In particular, more and more people are discovering that Ruby's flexibility, superb feature set, and gentle learning curve make it a natural choice for system administration tasks, from the humblest server to the largest enterprise deployment.

Based on author André Ben Hamou's own experiences working as a system administrator, this book will help you pick up practical tips on Ruby coding style, learn how to analyze and improve script performance, and make use of no-nonsense advice on scripting workflow, including testing and documentation.

Above all, you'll come to appreciate the sheer power of Ruby and the hundreds of benefits it offers for system administration.

Andre Ben Hamou is the senior systems architect for Freedom 255, a major British Internet service provider. He was responsible for introducing Ruby to the organization, which is bringing about a massive increase in efficiency and interoperability both internally and with outside systems. Prior to this, he spent a decade as a general-purpose software hacker, working in Perl, C, C++, and Objective-C. He spent five years at Imperial College London working on various numerical problems including computational physics simulations, and graduated with a master of science degree with honors. He is also an associate of the Royal College of Science. During his time at Imperial College, he worked as a systems integrator within Imperial's prestigious Department of Computing. He likes walking, talking, and taking abusive liberties with the English language. He lives with his imaginary cat on the south coast of England.