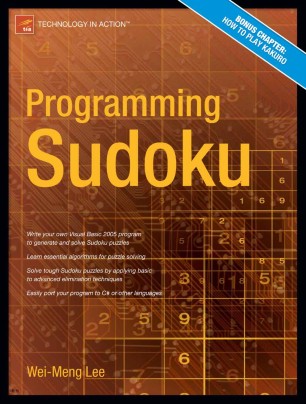 Sudoku is a wildly popular puzzle game. Sudoku puzzles are 9x9 grids, and each square in the grid consists of a 3x3 subgrid called a region. Your goal is to fill in the squares so that each column, row, and region contains the numbers 1 through 9 exactly once. And some squares already contain numbers or symbols, which lend clues toward the solution.

Programming Sudoku provides you with great approaches to building and solving Sudoku and other similar puzzles. Using ingenious artificial intelligence and game theory techniques, you'll learn how to get a computer to solve these puzzles for you.

This is a fun, intriguing read, whether you're a novice or advanced programmer. It acknowledges the .NET platform as a base, but you'll find this book interesting whatever your programming background. The core techniques in the book enable you to solve Sudoku on any programming platform.