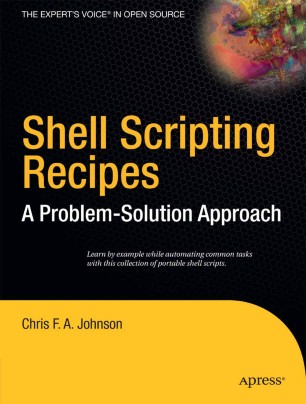 This book is geared towards any Unix user who doesn't want to spend time creating or testing shell scripts. Instead, Shell Scripting Recipes dissects and explains over 150 much-needed and practical real-world examples, and then shows the reader how and when to appropriately use them.

Because most scripts found in this book are POSIX (Portable Operating System Interface)-compliant, they are supported by many of the major shell variants, including Bash, ksh and sh, among others. File conversion, system administration, and resource monitoring are just a few of the topics covered in this highly practical shell scripting reference.

Chris F.A. Johnson was introduced to Unix in 1990 and learned shell scripting because there was no C compiler on the system. His first major project was a menu-driven, user-extensible database system with report generator. Chris uses the shell as his primary, general-purpose programming language, and his projects have included a member database, menuing system, and POP3 mail filtering and retrieval. Chris is the author of Shell Scripting Recipes: A Problem-Solution Approach (Apress, 2005). When not pushing shell scripting to the limit, he designs and codes web sites, teaches chess, and composes cryptic crosswords.