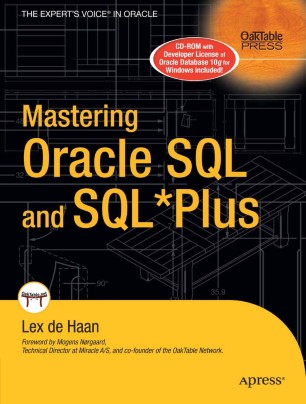 This exceptional book explains fundamentals in detail, supported by realistic examples, while most other books on the market do not properly cover such basics. If you work with relational databases you need to understand the SQL language. And you will gain full competence to define, access, and manipulate data in an Oracle database, if you do so following this book's guidance.

This book is fully compliant with the latest version of the ANSI SQL standard, and fully updated for the Oracle 10g database. Furthermore, this book is based on a popular Netherlands college textbook (currently in its third edition). And author Lex de Haan is vastly experienced with the Oracle database, and has 25 years of teaching experience. de Haan is also a member of the ANSI/ISO SQL standardization national body.

Lex de Haan studied applied mathematics at the University of Technology in Delft, the Netherlands. His experience with Oracle goes back to the mid-1980s, version 4. He worked for Oracle Corporation from 1990 to 2004 in various education-related roles, ending up in Server Technologies (product development) as senior curriculum manager for the advanced database administration curriculum. In that role, he was involved in the development of Oracle9i and Oracle Database 10g. In March 2004, he decided to go independent and founded Natural Join B.V. (http://www.naturaljoin.nl). From 1999 until his passing in 2006, he was involved in the ISO SQL language standardization process, as a member of the Dutch national body. He was also one of the founding members of the OakTable network (http://www.oaktable.net).