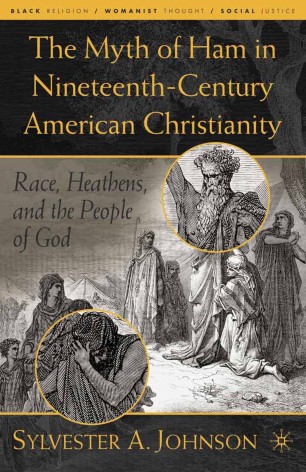 The Myth of Ham in Nineteenth-Century American Christianity

Race, Heathens, and the People of God

This monograph is an original study of what is commonly termed the American "myth of Ham". It examines black and white Americans' recourse to the biblical character of Ham as a cultural strategy for explaining racial origins. Previous studies in the area have been restricted to associating the Hamitic idea with pro-slavery arguments, whereas the thesis of this project reveals a fundamental irony: black American Christians who reinforced the meanings of illegitimacy by appealing to Ham as the ancestor of the race.

Sylvester Johnson is Assistant Professor of Religion and Philosophy at Florida A&M University.

"While the story of Ham and Canaan has received attention in the past because of its profound impact on life for African Americans in the United States, The Myth of Ham in Nineteenth-Century American Christianity offers much needed complexity to traditional interpretations of the story and its ramifications. Wrestling with notions of illegitimacy and divine identity as major connotations of this story, Sylvester Johnson provides powerful insights that will challenge and inform. I highly recommend this text as an important addition to American and African American Religious Thought." - Anthony B. Pinn, Agnes Cullen Arnold Professor of Humanities and Professor of Religious Studies, Rice University

"In this creative and challenging interpretation of the uses of the myth of Ham in American religious discourse, Sylvester Johnson makes an important contribution to our understanding of the relationship between religion and constructions of race. Readers will be grateful for Johnson's perceptive discussion of 19th century African Americans' complex negotiation of collective identity as simultaneously the people of God and the children of Ham and for his incisive analysis of the historical connections between narratives of American chosenness and white racial identity." - Judith Weisenfeld, Vassar College, author of African American Women and Christian Activism: New York's Black YWCA, 1905-1945