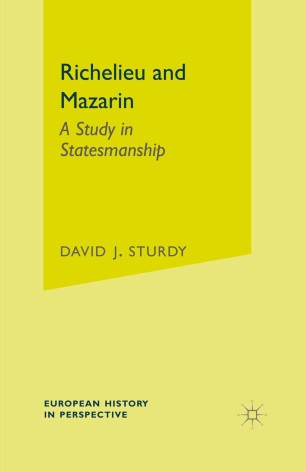 A Study in Statesmanship

Drawing upon recent research and past studies, David J. Sturdy presents a concise, up-to-date analysis of the private and public careers of two of the most influential ministers in seventeenth-century France.

Richelieu and Mazarin:
- adopts a broadly chronological approach, interspersed with passages at relevant points which compare and contrast the key achievements of the two Cardinals
- examines such central themes as the internal government of France, the ministers' conduct of foreign policy, and the nature of elite and popular resistance to their policies
- explores the political ideas and strategies of Richelieu and Mazarin, the relations between the ministers and the Crown, and the patronage they exercised

The book concludes with a comparative assessment of the significance of the two figures for the history of France.

DAVID J. STURDY is Professor of Early Modern History at the University of Ulster. He specializes in the political and social history of France and in the history of science. His previous publications include Louis XIV, also in the European History in Perspective series.