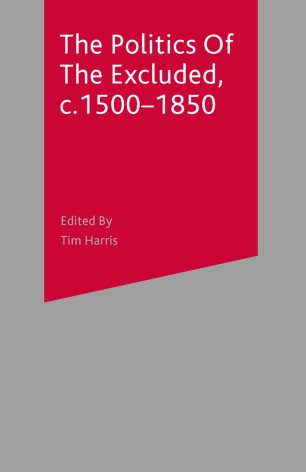 This collection of essays seeks to shed light on the politics of those people who are normally thought of as being excluded from the political nation in early modern England. If by political nation we mean those who sat in parliament, the governors of counties and towns, and the enfranchised classes in the constituencies, then the 'excluded' would be those who were neither actively involved in the process of governing nor had any say in choosing those who would rule over them - the bulk of the population at this time. Yet this volume shows that these people were not, in fact, excluded from politics. Not only did the masses possess political opinions which they were capable of articulating in a public forum, but they were alos often active participants in the political process themselves and taken seriously in that capacity by the governmental elite.

The various essays deal with topics as wide-ranging as riots, rumours, libels, seditious words, public opinion, the structures of local government, and the gendered dimensions of popular political participation, and cover the period from the eve of the Reformation to the Industrial Revolution. They challenge many existing assumptions concerning the nature and significance of public opinion and politics out-of-doors in the early modern period and show us that the people mattered in politics, and thus why we, as historians, cannot afford to ignore them. Politics was more participatory, in this undemocratic age, than one might have thought. The contributors to this volume show that there was a lively and engaged public sphere throughout this period, from Tudor times to the Georgian era.

TIM HARRIS is Professor of History at Brown University.