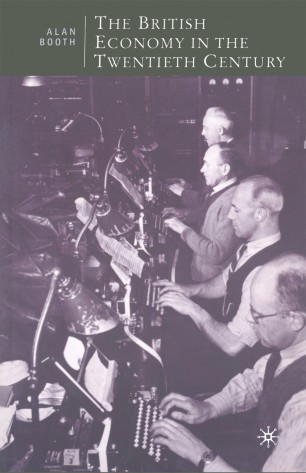 The British Economy in the Twentieth Century

It is commonplace to assume that the twentieth-century British economy has failed, falling from the world's richest industrial country in 1900 to one of the poorest nations of Western Europe in 2000. Manufacturing is inevitably the centre of this failure: British industrial managers cannot organise the proverbial 'knees-up' in a brewery; British workers are idle and greedy; its financial system is uniquely geared to the short term interests of the City rather than of manufacturing; its economic policies areperverse for industry; and its culture is fundamentally anti-industrial. There is a grain of truth in each of these statements, but only a grain.

In this book, Alan Booth notes that Britain's living standards have definitely been overtaken, but evidence that Britain has fallen continuously further and further behindits major competitors is thin indeed. Although British manufacturing has been much criticised, it has performed comparatively better than the service sector.

The British Economy in the Twentieth Century combines narrative with a conceptual and analytic approach to review British economic performance during the twentieth century in a controlled comparative framework. It looks at key themes, including economic growth and welfare, the working of the labour market, and the performance of entrepreneurs and managers. Alan Booth argues that a careful, balanced assessment (which must embrace the whole century rather than simply the post-war years) does not support the loud and persistent case for systematic failure in British management, labour, institutions, culture and economic policy. Relative decline has been much more modest, patchy and inevitable than commonly believed.

ALAN BOOTH is Senior Lecturer in Economic and Social History at the University of Exeter.