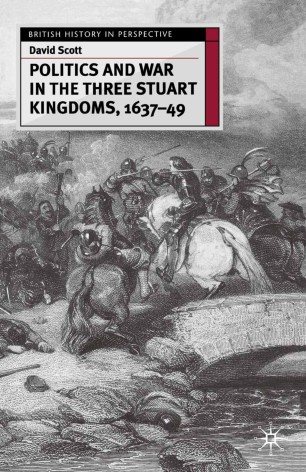 Politics and War in the Three Stuart Kingdoms, 1637–49

The 1640s were one of the most exciting and bloody decades in British and Irish history. This book interweaves the narrative threads in each theatre of conflict to provide an holistic account and analysis of the wars in and between England, Scotland and Ireland, from the Covenanter Rebellion to the execution of Charles I.

Politics and War in the Three Stuart Kingdoms, 1637-49
- stresses the need to examine the English Civil War within the context of the other conflicts in Scotland and Ireland, and vice versa
- explores key themes, such as the relationship between armies and elites
- assesses the extent to which the wars in and between the kingdoms were the product of religious and ethnic hatred

Using a wide range of original and secondary sources, and incorporating the latest research, David Scott offers a challenging new interpretation of political structure and dynamics in the warring Stuart realms.

DAVID SCOTT is Senior Research Fellow in the 1640-60 section of the History of Parliament Trust, London. He is the author of a number of articles and essays on British politics in the 1640s, and co-edited The Journal of Thomas Juxon, 1644-1647 (1999).