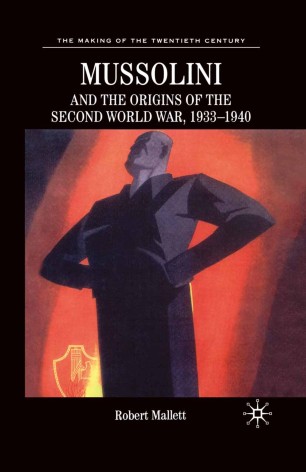 The true nature of Mussolini's foreign policy during the late interwar period has been the subject of considerable controversy. Was Mussolini in reality pro-British, even as late as June 1940; or was his international policy more sinister and based on conquering a Fascist empire in North Africa and the Middle East?

Robert Mallett makes use of much new archival evidence in order to answer this riddle of interwar history. Mallett argues that Mussolini had harboured imperial designs in the Mediterranean and Red Sea from as early as 1919, but that not until 1933, with the rise of Hitler, was it possible for Fascist Italy to pursue a programme of territorial expansion. Previously unpublished material also casts new light on the Nazi-Fascist relationship, revealing it to be at times paranoid, acrimonious and duplicitous on both sides.

Although the book focuses on Italian policy, it provides an important reassessment of the Ethiopian Crisis, the Spanish Civil War, the Austro-German Anschluss, Munich and the run up to the Second World War. Mallett shows that it is erroneous to place excessive emphasis on the role of Adolf Hitler in subverting the interwar international order, and demonstrates that Mussolini was heavily implicated in the global conflict that erupted in September 1939.

ROBERT MALLETT is Visiting Lecturer in Modern History at the University of Birmingham.