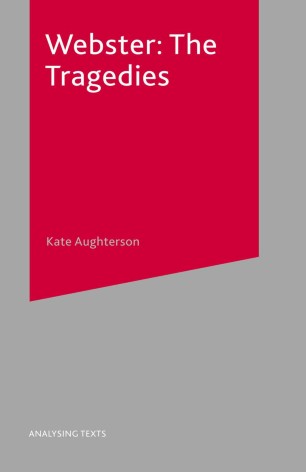 Webster's theatre was also Shakespeare's theatre: but their tragedies are very different. Webster has a reputation for angst-ridden, obsessive and debased characters and the creation of a sick and decaying world. Yet his heroines are the amongst the strongest characters, male or female, in Jacobean drama.

This book shows how Webster's plays portray a world in which patriarchal, aristocratic politics are dissected as diseased. Through close analysis of key moments, scenic and dramatic structure, characterisation, theatricality and imagery, this book enables students to appreciate Webster's individual contribution to our dramatic heritage. Through such textual reading, we learn how he uses drama to debate contemporary political and social issues, most explicitly those of gender. The book provides students with effective reading, critical and analytical tools with which to approach Webster's plays as dramatic scripts for our time, as well as their own, and thus as rivals to Shakespeare's major tragedies.