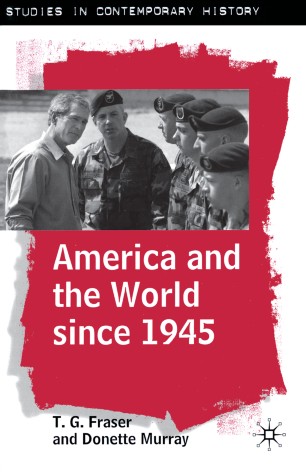 Part of the Studies in Contemporary History book series (SCH)

American foreign policy is fundamental to any understanding of how the post-war world has been shaped. This insightful and wide-ranging book analyses the policies pursued by each presidency from that of Harry Truman to George W. Bush, and reviews the far-reaching consequences of these actions. Taking into account the most recent research and scholarly interpretations, T. G. Fraser and Donette Murray examine the priorities of each successive administration and how these have had to adapt under the pressure of events on a global scale.

America and the World since 1945
- focuses on the origins and course of the Cold War
- explains major crises and developments, such as the Truman Doctrine, the nature of containment, the Cuban Missile Crisis, Berlin, arms control and detente
- features analysis of how America became involved in armed conflict, as in Korea, the Gulf, the Balkans and Vietnam
- looks at American action in relation to the Arab-Israeli conflict, as well as interventions in Latin America and Africa
- traces the evolution of policy towards China
- studies conventional diplomacy alongside the use of intelligence and covert activity
- examines the dynamics of the post-Cold War world

Clear in its approach, this book is essential reading for anyone with an interest in America's relationship with the rest of the world from the end of the Second World War up to the aftermath of the attacks on the World Trade Center and the Pentagon in September 2001.

T.G. FRASER is Professor of History and Provost at the University of Ulster.

DONETTE MURRAY is Lecturer in Defence Studies at the Royal Military Academy, Sandhurst.