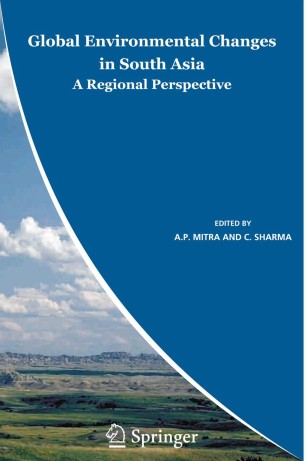 The Fourth Assessment Report of IPCC having clinched in 2007 the evidence of global warming on account of anthropogenic activities, backed with scientific data gathered and analyzed globally, has made it mandatory world over to focus efforts on delineation of the anticipated adverse impacts of global warming on regional temperature and moisture regimes and the linked hydrologic, climatic and biospheric processes. First and foremost is the requirement to understand vulnerability to food and livelihood security in various ecosystems—on mainland, mid-range and high mountains as well as coastal areas including CEZs. The projected global temperature rise of the order of about two degrees or more and further rise at a decadal rate of o around 0. 2 C is sufficient to make grievous changes in sea surface level and submerge many low lying coastal areas around the world thereby possibly causing unprecedented losses to human habitat and livelihood in the coming years. A rise in climate variability is also becoming increasingly evident with potential direct impact on agricultural performance, on water accessibility and on weather extremes. Developing countries due to their poor infrastructure, limited resources and large impoverished population are likely to face more intense and wi- spread adverse impact of climate change than the developed world and also have limited adaptation capacity.