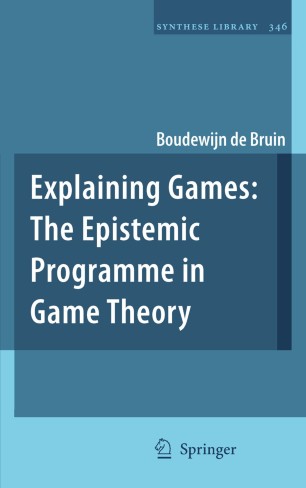 The Epistemic Programme in Game Theory

Does game theory - the mathematical theory of strategic interaction - provide genuine explanations of human behaviour? Can game theory be used in economic consultancy or other normative contexts? Explaining Games: The Epistemic Programme in Game Theory - the first monograph on the philosophy of game theory - is a bold attempt to combine insights from epistemic logic and the philosophy of science to investigate the applicability of game theory in such fields as economics, philosophy and strategic consultancy. De Bruin proves new mathematical theorems about the beliefs, desires and rationality principles of individual human beings, and he explores in detail the logical form of game theory as it is used in explanatory and normative contexts. He argues that game theory reduces to rational choice theory if used as an explanatory device, and that game theory is nonsensical if used as a normative device. A provocative account of the history of game theory reveals that this is not bad news for all of game theory, though. Two central research programmes in game theory tried to find the ultimate characterisation of strategic interaction between rational agents. Yet, while the Nash Equilibrium Refinement Programme has done badly thanks to such research habits as overmathematisation, model-tinkering and introversion, the Epistemic Programme, De Bruin argues, has been rather successful in achieving this aim.

Boudewijn de Bruin is assistant professor of philosophy in the Faculty of Philosophy of the University of Groningen. He obtained his Ph.D. in philosophy from the Institute for Logic, Language and Computation in Amsterdam. His dissertation was awarded several prizes including a Research Prize from the Praemium Erasmianum Foundation. De Bruin did undergraduate work in musical composition at Enschede, and studied mathematics and philosophy at Amsterdam, Berkeley and Harvard. His research interests include epistemology, moral and political philosophy and philosophy of science. Receiver of several prestigious research grants, De Bruin is published widely in such journals as Ethical Theory and Moral Practice, Journal of Political Philosophy, Studies in History and Philosophy of Science and Synthese.

"The 'epistemic' approach to game theory has emerged over the past twenty-five years. What is this approach? How does it differ from the conventional equilibrium-based approach to game theory? What have been its strengths and weaknesses to date? To find out, read this comprehensive and excellently written account."
Adam Brandenburger, J. P. Valles Professor of Business Economics and Strategy, Stern School of Business, New York University

"Reading Boudewijn de Bruin's book should be rewarding both for game theorists interested in the conceptual foundations of their discipline and for philosophers who want to learn more about formal analysis of strategic interaction. It provides an in-depth logical study of the currently dominant epistemic approaches to non-cooperative games, with an eye both to the attractions and to the serious challenges facing the Epistemic Programme."
Wlodek Rabinowicz, Professor of Practical Philosophy, Department of Philosophy, Lund University
Buy options