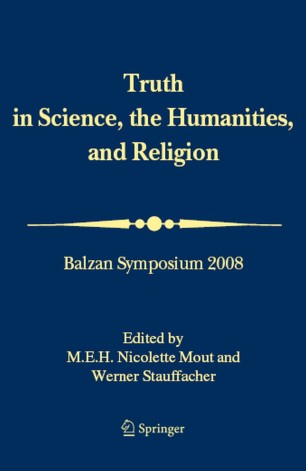 Truth in Science, the Humanities and Religion~

by the Academies of the two countries – to the Italian-Swiss University of Lugano for the two-day-Symposium. The question of the meaning of “truth” is central to many areas of contemporary debate, whether between those subscribing to a post-Enlightenment view of the world and those who seek fundamental truth in religious texts, or between those maintaining that there are absolute truths and those believing facts to be social constructs. For some, the ultimate truth is revealed through religious faith and t- tual authority. Can this view be reconciled with an evidence-based, materialist, post-Enlightenment perspective of the truth as embraced by the natural sciences? If religion holds the key to the truth, which religion and which truths? During the five thematic sessions of the symposium, all attended by the same audience and by all the speakers and panel members, these and many other qu- tions, but in particular the one about the meaning of truth, were examined and debated. The whole range of perspectives represented on the panels and in the au- ence came to the fore. After the keynote lecture by Professor Simon Blackburn, the five sessions covered the following disciplines: philosophy, mathematics, physics, cosmology, the biological sciences including biodiversity and sustainability, h- tory, the social sciences, theology and religion. This volume contains the speakers’ lectures, the corresponding reactions of the invited panel members as well as the panel and general discussions of the two-d- symposium.

The Balzan Foundation is a high profile organization that has surrounded itself with a list of renowned and established scholars, among them Nobel Prize winners and nominees. They fund three annual prizes (one for literature, moral sciences and art; one for physics, mathematics, natural sciences and medicine; and one for humanities, peace and brotherhood amongst people) and organize a symposium (mainly attended by former prize winners) once every 4 years.

The editor(s) for this volume are to be selected by Balzan and Springer.