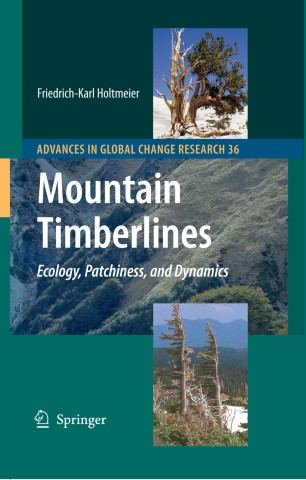 Mountain Timberlines is published as part of the broad area of research on the changing global climate and its impact on the environment. The upper timberline is the most conspicuous vegetation limit in high-mountain areas of all continents and islands, except for the Antarctic. The dynamics of timberline establishment and maintenance is being affected by global warming in a number of ways. From a global view point, the present timberline is far from being caused only by the current climate, but instead reflects also history of climate, human impact and local site conditions. It is the objective of the book to highlight the physiognomic and ecological variety of mountain timberlines as well as their regionally and locally varying heterogeneity and temporal dynamics thus giving a complex view of the global timberline pattern.

After an introduction into the complexities of the subject, the history and present state of timberline research are outlined. Chapters on the tree species at timberline and on the relationship of timberline elevation to marcroclimate, climate character and the mass-elevation effect follow. The main chapter deals with the physiognomic and ecological differentiation of altitudinal timberlines, in particular with the timberline controlling physical and biological factors, their interactions and their influence on the spatial structures and temporal dynamics in the timberline ecotone. Also, the feedbacks of trees and tree stands on the timberline environment are considered. This is the base for understanding the response of timberlines to climatically driven changes, which are considered in the last chapters.