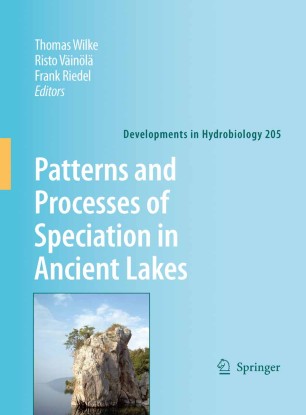 Patterns and Processes of Speciation in Ancient Lakes

Proceedings of the Fourth Symposium on Speciation in Ancient Lakes, Berlin, Germany, September 4–8, 2006

Part of the Developments in Hydrobiology book series (DIHY, volume 205)

Ancient lakes are exceptional freshwater environments that have continued to exist for hundreds of thousands of years. They have long been recognized as centres of biodiversity and hotspots of evolution. During recent decades, speciation in ancient lakes has emerged as an important and exciting topic in evolutionary biology.

The contributions in this volume deal with patterns and processes of biological diversification in three prominent ancient lake systems. Of these, the famous East African Great Lakes already have a strong tradition of evolutionary studies, but the two other systems have so far received much less attention. The exceptional biodiversity of the European sister lakes Ohrid and Prespa of the Balkans has long been known, but has largely been neglected in the international literature until recently. The rich biota and problems of its evolution in the two central lake systems on the Indonesian island of Sulawesi, in turn, have only lately started to draw scientific attention.

This volume aims at deepening the awareness of the unusual biological diversity in ancient lakes in general, and of the role of these lakes as natural laboratories for the study of speciation and diversification in particular. It should stimulate further research that will lead to a better understanding of key evolutionary processes in these lakes, and to knowledge that might help in mitigating the deterioration of their diversity in the future.