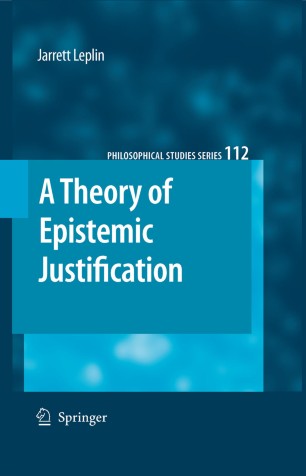 A Theory of Epistemic Justification

This book proposes an original theory of epistemic justification that offers a new way to relate justification to the epistemic goal of truth-conducive belief. The theory is based on a novel analysis of reliable belief-formation that answers classic objections to reliability theories in epistemology. The analysis generates a way of distinguishing justified belief from believing justifiedly, such that inerrant belief-formation need not be justificatory whereas systemic deception could be. It thereby respects the intuition that standards for justification must be accessible to the believer, while maintaining the essential connection of justification to truth.

The analysis shows how justification relates to, but is distinct from, evidence, rationality, and probability. It provides a unifying treatment of issues central to current debate in epistemology, including epistemic paradoxes, epistemic closure, skepticism, contextualism, virtue theories, the effect of luck on knowledge and justification, the interpretation of subjunctive conditions for justification, the conflict between internalism and externalism, and metaphilosophical evaluation of epistemological theories. There are further applications to metaphysics, the philosophy of language, the philosophy of science, and ethics.

The book will engage philosophers working in epistemology or related fields, and their graduate students.

Jarrett Leplin is Professor of Philosophy at the University of North Carolina, Greensboro. He received his undergraduate degree in mathematics from Amherst College in 1966, and his PhD in philosophy from the University of Chicago in 1972. He specializes in the philosophy of science and epistemology. He has lectured at over 50 universities and professional conferences, and is the author of over 100 publications, including "A Novel Defense of Scientific Realism", published by Oxford University Press in 1997. His work has focued on philosophical issues involving scientific method, the epistemology of scientific change, realism and instrumentalism, the nature of evidence, epistemic paradoxes, and reliabilist theories of justification and knowledge. He is the recipient of an NEH fellowship, an NEH summer stipend, and grants from the Philosophy of Science Association and the American Philosophical Society. Leplin has been Program Director of the Philosophy of Science Association and President of the North Carolina Philosophical Society.