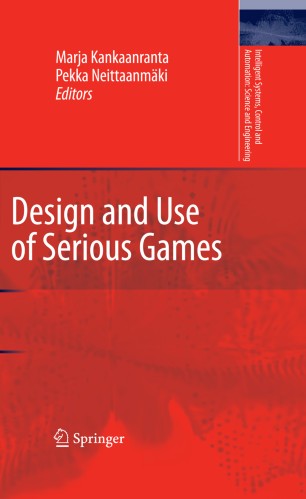 Design and Use of Serious Games

During the last few years, a new area of creative media industry, namely Serious Games, has started to emerge around the world. The term serious games has become more popular for example in the fields of education, business, welfare and safety. Despite this, there has been no single definition of serious games. A key question, what the concept itself means, has stayed unsolved though most have agreed on a definition that serious games are games or game-like interactive systems developed with game technology and design principles for a primary purpose other than pure entertainment.

In this book, serious games are understood as games which aim at providing an engaging, self-reinforcing context in which to motivate and educate the players. Serious games can be of any genre, use any game technology, and be developed for any platform. They can be entertaining, but usually they teach the user something. The central aim of serious games is to raise quality of life and well-being. As part of interactive media industry, the serious games field focuses on designing and using digital games for real-life purposes and for the everyday life of citizens in information societies. The field of serious games focuses on such areas as education, business, welfare, military, traffic, safety, travelling and tourism.

"Kankaanranta and Neittaanmäki (Univ. of Jyväskylä, Finland) provide an eclectic collection of 13 papers focused on the emerging field of serious games … . The volume is divided into four sections … . The papers are derived from presentations made at a serious games conference held in 2008 at the Univ. of Jyväskylä … . it provides those who are currently engaged in or contemplating serious game development with potentially new insights and issues to consider. Summing Up: Recommended. Researchers/faculty and professionals/practitioners." (A. Chen, Choice, Vol. 47 (1), September, 2009)