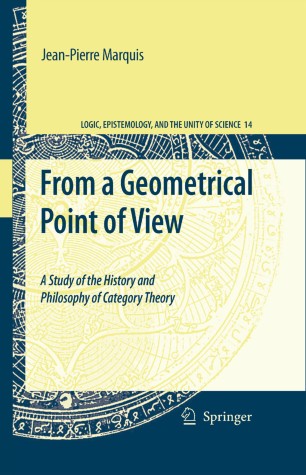 From a Geometrical Point of View

A Study of the History and Philosophy of Category Theory

Part of the Logic, Epistemology, and the Unity of Science book series (LEUS, volume 14)

From a Geometrical Point of View explores historical and philosophical aspects of category theory, trying therewith to expose its significance in the mathematical landscape. The main thesis is that Klein’s Erlangen program in geometry is in fact a particular instance of a general and broad phenomenon revealed by category theory. The volume starts with Eilenberg and Mac Lane’s work in the early 1940’s and follows the major developments of the theory from this perspective. Particular attention is paid to the philosophical elements involved in this development. The book ends with a presentation of categorical logic, some of its results and its significance in the foundations of mathematics.

From a Geometrical Point of View aims to provide its readers with a conceptual perspective on category theory and categorical logic, in order to gain insight into their role and nature in contemporary mathematics. It should be of interest to mathematicians, logicians, philosophers of mathematics and science in general, historians of contemporary mathematics, physicists and computer scientists.