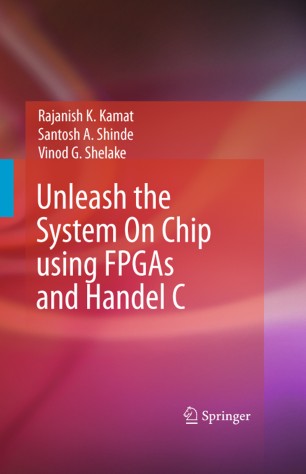 Unleash the System On Chip using FPGAs and Handel C

The last two decades have witnessed the overhauling growth in microelectronics and it has emerged as a major new technological force shaping our everyday lives. Apart from the ubiquitous penetration in the social life, the microelectronics is going though a paradigm shift from the VLSI to personal computers, mobile devices and finally converging to single-chip solutions embedded with  the intelligence in both hardware and software form. It is undisputed fact that the System-on-a-chip (SoC) is revitalizing the design of integrated circuits due to the unprecedented levels of integration possible and has become the pervasive next generation revolution in microelectronics and Chip Design.

The proliferation of ‘SoC’ have made most of the prognosticators to bet that it is going to sustain and thrive the accelerated growth in the semiconductor market. However, the designers are agonized about the resuscitation of the Moore’s law that has delivered consistently since about 1975, inspite of changing the design perceptions from transistors to IP cores, functional and structural diversification which is popularly known as “More than Moore”. In nutshell, the ‘Halcyon Days’ enjoyed by the VLSI industry are behind us and there is constant quest for development of  affluent design methodologies for addressing the narrow market windows and accelerated obsolescence cycles that naturally impose reduced development times for the devices in the new era belonging to SoCs.

Unleash the System On Chip using FPGAs and Handel C is an attempt to empower the design community by delivering the ‘know-how’ developed by the authors through their vast development experience in the areas of  ‘VLSI Design’, Embedded Systems, ‘Hardware Software Co-Design’,  ‘Reconfigurable System Design’ and ‘Network On Chip Design’. The book effectively showcases building the SoC from ‘Concept to Product’. With the founding conception that the future SoC designer is today’s software designer, the book laid emphasis on ‘C’ based methodology which is considered at a much higher level of abstraction. The emerging ‘hardware-software functional alloy’ perception of the SoCs is comprehended by leveraging the bottom up (i.e. design reuse)  approach by edifying with the soft IP cores developed in Handel C which is also the pragmatic approach to bridge the gap between productivity, yield, quality, specifications (temporal and spatial), verification and prototyping. The hard design process of SoC is exemplified by a synergic approach of combining the flexibility and performance of FPGAs with the rich set of available soft IP cores developed in Handel C. More complex design approaches such as ‘partial reconfiguration’, ‘concurrent hardware software SoC realization’ are addressed by using the Xilinx EDK toolset. With the growing trend of SoC designer becoming the ‘network engineer’ and vice versa, few case studies have devoted towards building the ‘Network on Chip (NoC)’. System optimization and quick verification is dealt in this book by adopting co-simulation and third party tool integration such as ModelSim. Other diversified, still interesting SoC case studies that will definitely help the designers in building intelligent chips are fuzzy logic controllers, code converters, arithmetic on chip etc. Control system SoCs are  realized in this book by using the Soft IP processor cores such as ‘picoblaze’. This  will definitely open a window for the Embedded Developers pursuing their one chip design endeavors.  The complicated concepts such as design flow with respect to the Handel C, EDK etc. are simplified by giving actual screenshots and step by step approach, so that a mere walk though them will give a “Hands-On’ approach. Finally through 35 working Handel C cores,  seven chapters and 128 references chosen from the selected  white papers, research papers and WEB URLs will definitely empower the SoC veteran as well as beginner in not only getting acquainted with the innovative design methodologies of building the SoCs, but also opens a new door of research and development and infinite set of futures in this ever-growing enabling technology of this century.