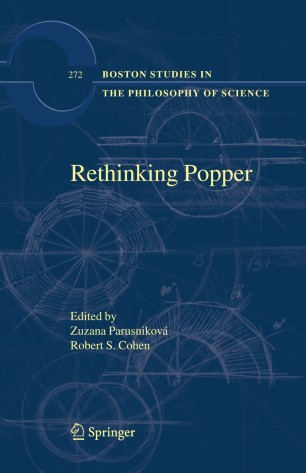 Part of the Boston Studies in The Philosophy of Science book series (BSPS, volume 272)

In September 2007, more than 100 philosophers came to Prague with the determination to approach Karl Popper’s philosophy as a source of inspiration in many areas of our intellectual endeavor. This volume is a result of that effort. Topics cover Popper’s views on rationality, scientific methodology, the evolution of knowledge and democracy; and since Popper’s philosophy has always had a strong interdisciplinary influence, part of the volume discusses the impact of his ideas in such areas as education, economics, psychology, biology, or ethics.

The concept of falsification, the problem of demarcation, the ban on induction, or the role of the empirical basis, along with the provocative parallels between historicism, holism and totalitarianism, have always caused controversies. The aim of this volume is not to smooth them but show them as a challenge. In this time when the traditional role of reason in the Western thought is being undermined, Popper’s non-foundationist model of reason brings the Enlightenment message into a new perspective. Popper believed that the open society was vulnerable, due precisely to its tolerance of otherness. This is a matter of great urgency in the modern world, as cultures based on different values gain prominence.  The processes related to the extending of the EU, or the increasing economic globalization also raise questions about openness and democracy. The volume’s aim is to show the vitality of critical rationalism in addressing and responding to the problems of this time and this world.