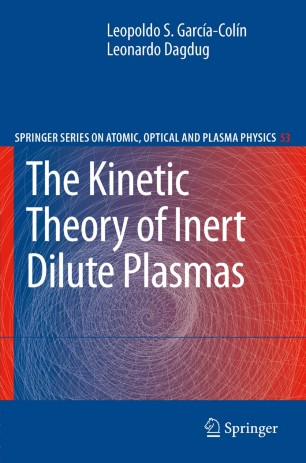 The Kinetic Theory of a Dilute Ionized Plasma

This book results from recent studies aimed at answering questions raised by astrophycists who use values of transport coefficients that are old and often unsatisfactory. The few books dealing with the rigorous kinetic theory of a ionized plasma are based on the so called Landau (Fokker-Planck) equation and they seldom relate the microscopic results with their macroscopic counterpart provided by classical non-equilibrium thermodynamics. In this book both issues are thoroughly covered. Starting from the full Boltzmann equation for inert dilute plasmas and using the Hilbert-Chapman-Enskog method to solve the first two approximations in Knudsen´s parameter, we construct all the transport properties of the system within the framework of linear irreversible thermodynamics. This includes a systematic study of all possible cross effects (which, except for a few cases, were never treated in the literature) as well as the famous H-theorem. The equations of magneto-hydrodynamics for dilute plasmas, including the rather surprising results obtained for the viscomagnetic effects, may be now fully assessed. This book will be of immediate interest to the plasma physics community, as well as to astrophysicists. It is also likely to make an impact in the field of cold plasmas, involving laser cooled Rydberg atoms.