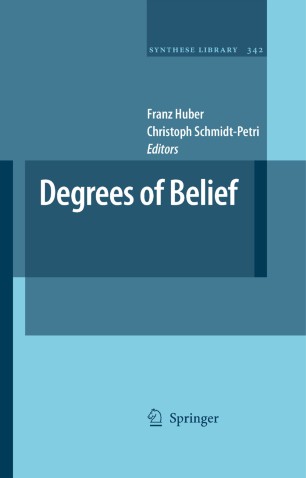 The idea that belief comes in degrees is based on the observation that we are more certain of some things than of others. Various theories try to give accounts of how measures of this confidence do or ought to behave, both as far as the internal mental consistency of the agent as well as his betting, or other, behaviour is concerned.

This anthology is the first book to give a balanced overview of these theories. It also explicitly relates these debates to more traditional concerns of the philosophy of language and mind, and epistemic logic, namely how belief simpliciter does or ought to behave. The paradigmatic theory, probabilism (which holds that degrees of belief ought to satisfy the axioms of probability theory) is given most attention, but competing theories, such as Dempster-Shafer theory, possibility theory, and AGM belief revision theory are also considered. Each of these approaches is represented by one of its major proponents.

The papers are specifically written to target advanced undergraduate students with a background in formal methods and beginning graduate students, but they will also serve as first point of reference for academics new to the area.

"This is a fascinating collection that brings together issues in traditional and formal epistemology, and succeeds in posing new challenges for both." Bas C. van Fraassen, San Francisco State University

"This is a splendid collection of essays on degrees of belief. [...] the essays are so clear and general that the book also provides an excellent overview of the field for the non-expert." Frank Arntzenius, University College, Oxford University

Christoph Schmidt-Petri has been awarded a PhD in Philosophy from the London School of Economics in 2005, where he also held a pre-doctoral Jacobsen Fellowship. He has been a member of the Philosophy, Probability and Modeling Group at the University of Konstanz, the Faculty of Economics at Witten/Herdecke University, and the Departments of Philosophy at the Universities of Glasgow, Saarbrücken and Leipzig. From 2002 till 2008, he has been Managing Editor of Economics and Philosophy. He has published articles in journals such as The Philosophical Quarterly, Philosophy of Science, Analyse & Kritik, and is the editor of several other books in political philosophy and the philosophy of the social sciences.

“Degrees of Belief is a strong collection of essays distinguished by its inclusion of an unusually wide array of approaches to understanding its subject. … the book is best suited for formally proficient advanced students (graduate or upper-level undergraduate) or professionals seeking to explore other approaches to degree of belief than the ones in which they currently work. … Degrees of Belief is an excellent springboard for exploring the many approaches to degrees of belief currently being investigated in the literature.” (Lyle Zynda, Metascience, Vol. 21, 2012)

“This is a fascinating collection that brings together issues in traditional and formal epistemology, and succeeds in posing new challenges for both. Especially notable are the arguments for and against attempted justification of probability representations of opinion, with special reference to self-locating beliefs and rules for updating.” Bas C. van Fraassen, San Francisco State University

“This is a splendid collection of essays on degrees of belief. Contributions are from the leading figures in the field, and, consequently, it contains an authoritative survey and assessment of current accounts of degrees of belief. [...] the essays are so clear and general that the book also provides an excellent overview of the field for the non-expert.” Frank Arntzenius, University College, Oxford University

“Modern Bayesian probabilism sometimes seems under threat from two fronts. Some theorists think that Bayesians can't make sense of traditional concepts such as belief and knowledge. Other theorists think that restrictions on degrees of belief given by probability theory are too restrictive. This collection includes state of the art work on both of these challenges, with both the challenges and the responses well represented. Anyone interested in formal epistemology, or in the implications of formal epistemology for philosophy in general, should read this collection.” Brian Weatherson, Rutgers University