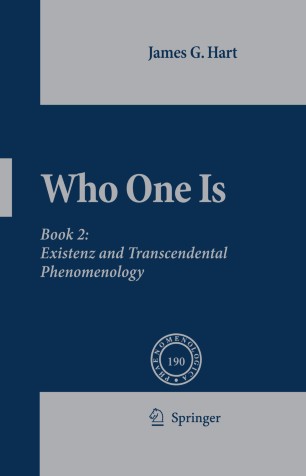 If I am asked in the framework of Book 1, "Who are you?" I, in answering, might say "I don’t know who in the world I am." Nevertheless there is a sense in which I always know what "I" refers to and can never not know, even if I have become, e.g., amnesiac. Yet in Book 2, "Who are you?"has other senses of oneself in mind than the non-sortal "myself." For example, it might be the pragmatic context, as in a bureaucratic setting; but "Who are you? Or "Who am I?" might be more anguished and be rendered by "What sort of person are you" or "What sort am I?" Such a question often surfaces in the face of a "limit-situation," such as one’s death or in the wake of a shameful deed where we are compelled to find our "centers," what we also will call "Existenz." "Existenz" here refers to the center of the person. In the face of the limit-situation one is called upon to act unconditionally in the determination of oneself and one’s being in the world.

In this Book 2 we discuss chiefly one’s normative personal-moral identity which stands in contrast to the transcendental I where one’s non-sortal unique identity is given from the start. This moral identity requires a unique self-determination and normative self-constitution which may be thought of with the help of the metaphor of "vocation." We will see that it has especial ties to one’s Existenz as well as to love. This Book 2 claims that the moral-personal ideal sense of who one is linked to the transcendental who through a notion of entelechy. The person strives to embody the I-ness that one both ineluctably is and which, however, points to who one is not yet and who one ought to be. The final two chapters tell a philosophical-theological likely story of a basic theme of Plotinus: We must learn to honor ourselves because of our honorable kinship and lineage "Yonder."