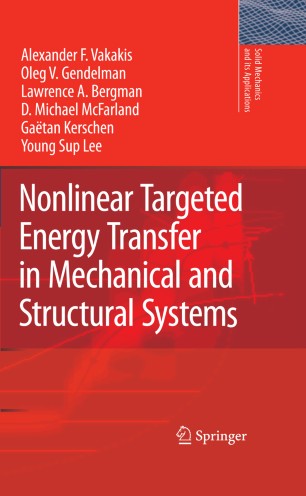 Part of the Solid Mechanics and Its Applications book series (SMIA, volume 156)

This monograph is the first in the new area of targeted nonlinear energy transfer in mechanical and structural systems. This concept was initially discovered by the two leading authors in 1999, and was further developed exclusively by the entire author group in the last 6 years. Since then, additional groups of researchers in the USA, Russia, UK and France have started working on this concept and applying it. It is estimated that in the years to come, the concept of targeted nonlinear energy transfer will be considered and applied by numerous groups ofresearchers and practitioners internationally. This monograph presents theoretical methods, computational results and experimental demonstrations of this concept applied to discrete and continuous coupled nonlinear oscillators. Moreover, it demonstrates the wide applicability of targeted nonlinear energy transfer to a wide range of problems, including:
- Vibration and shock isolation in mechanical systems
- Seismic mitigation
- Aeroelastic and structural instability suppression
- Drilling operations
- Packaging devices
This is a groundbreaking and unique volume, providing new design paradigms in a variety of fields.