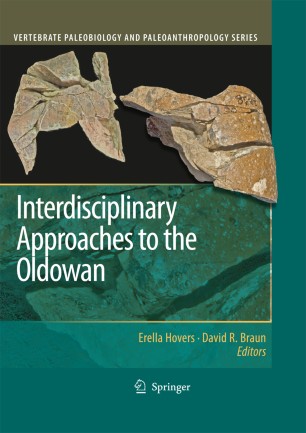 Interdisciplinary Approaches to the Oldowan

An understanding of the uniquely human behavior of stone tool making tackles questions about hominins’ ability to culturally transmit and expand their base of social and practical knowledge and their cognitive capacities for advanced planning. The appearance of stone tools has often been viewed as a threshold event, impacting directly and profoundly the later course of cultural and social evolution. Alternatively, it has been understood as a prelude to significant succeeding changes in behavioral, social and biological evolution of hominins. This book presents a series of recent enquiries into the technological and adaptive significance of Oldowan stone tools. While anchored in a long research tradition, these studies rely on recent discoveries and innovative analyses of the archaeological record of ca. 2.6 – 1.0 million years ago in Africa and Eurasia, dealing with the earliest lithic industries as manifestations of hominin adaptations and as expressions of hominin cognitive abilities.

Erella Hovers focuses on Oldowan and Middle Stone Age archaeology in Africa and on the Middle Paleolithic of the Levant. She is the co-editor (with Steve Kuhn) of "Transitions Before the Tansition" (Springer 2006) and the author of "The Organization of Mousterian Lithic Technology in Qafzeh Cave, Israel" (Oxford University Press, forthcoming 2009). She is a senior lecturer in the Institute of Archaeology, The Hebrew University of Jersualem.

David R. Braun’s research is centered on the relationship between around the earliest stone artifact behavior and the ecology of our earliest ancestors. His research is conducted in Kenya, South Africa and China. He is a lecturer in the department of archaeology in the University of Cape Town.