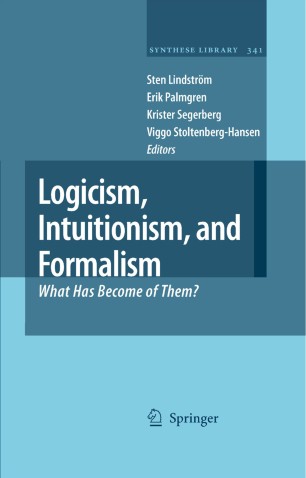 What has Become of Them?

The period in the foundations of mathematics that started in 1879 with the publication of Frege's Begriffsschrift and ended in 1931 with Gödel's Über formal unentscheidbare Sätze der Principia Mathematica und verwandter Systeme I can reasonably be called the classical period. It saw the development of three major foundational programmes: the logicism of Frege, Russell and Whitehead, the intuitionism of Brouwer, and Hilbert's formalist and proof-theoretic programme. In this period, there were also lively exchanges between the various schools culminating in the famous Hilbert-Brouwer controversy in the 1920s.

The volume will be of interest primarily to researchers and graduate students of philosophy, logic, mathematics and theoretical computer science. The material will be accessible to specialists in these areas and to advanced graduate students in the respective fields.

Sten Lindström is Professor of Philosophy at Umeå University and has been a Research Fellow at the Swedish Collegium for Advanced Study (SCAS). He has published papers on intensional logic, belief revision and philosophy of language, and co-edited the books Logic, Action and Cognition: Essays in Philosophical Logic (Kluwer, 1997) and Collected Papers of Stig Kanger with Essays on his Life and Work, I-II (Kluwer, 2001).

Krister Segerberg is Emeritus Professor of Philosophy at Uppsala University and the University of Auckland. He is the author of papers in modal logic, the logic of action, belief revision and deontic logic, as well as the books An Essay in Classical Modal Logic (1971) and Classical Propositional Operators: An Exercise in the Foundations of Logic (1982).

Viggo Stoltenberg-Hansen is professor of Mathematical Logic at Uppsala University. His main interests include computability and constructivity in mathematics.