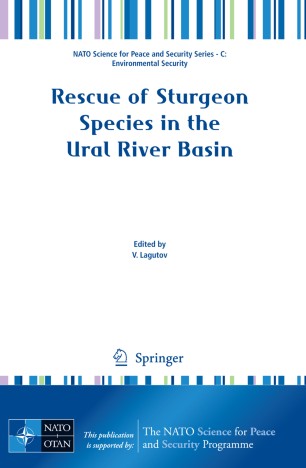 Rescue of Sturgeon Species in the Ural River Basin

While almost every aspect of society-nature interactions can be treated as an environmental security issue, the threats to human societies originating from inadequate freshwater management constitute one of the most wi- spread and pressing problems. For thousands of years rivers and river valleys have been the cradle of human civilizations. Rivers have provided not only food and freshwater, but also shelter and means of transportation, and they are still an essential component in every national and regional economy. In turn, growing needs of human societies, accompanied by growing abilities, have caused significant river alterations and ecosystem changes that have resulted in river contamination, biodiversity loss and general riverine ecosystem degradation. The extinction of sturgeon species is one of the most eloquent examples of the negative and irreversible influence of human society on river e- systems. The sturgeon, sometimes called the “living fossil” or living “dinosaur” of the fish world, is known to have lived since the time of the dinosaurs, for at least 250 million years, and is currently on the verge of extinction solely due to anthropogenic impacts.