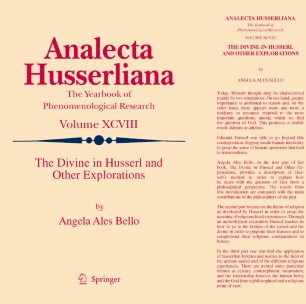 Angela Ales Bello The Divine In Husserl And Other Explorations

Today, Western thought may be characterized mainly by two temptations. On one hand, greater importance is attributed to reason and, on the other hand, there appears more and more a tendency to renounce respond to the most important questions, among which we find the question of God. This produces a double result: fideism or atheism.

Edmund Husserl was able to go beyond this contraposition, digging inside human interiority to grasp the sense of human operations that lead to transcendence.

Angela Ales Bello, in the first part of her book, The Divine in Husserl and Other Explorations, provides a description of Husserl’s method in order to explain how he deals with the question of God from a philosophical perspective. The results from this investigation are compared with the main contributions of the philosophers of the past.

The second part focuses on the theme of religion as developed by Husserl in order to grasp the meaning of religious lived-experiences. Through an archeological excavation Husserl teaches us how to go to the bottom of the sacred and the divine in order to pinpoint their features and to comprehend their religious configurations in history.

In the third part one can find the application of husserlian hyletics and noetics to the field of the archaic sacred and of the different religious experiences. There are treated some particular themes as ecstasy, contemplation, incarnation, and the relationship between the human being and the God from a philosophical and a religious point of view.