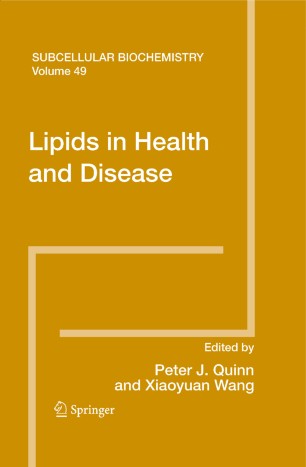 Lipids in Health and Disease

Lipids are functionally versatile molecules. They have evolved from relatively simple hydrocarbons that serve as depot storages of metabolites and barriers to the permeation of solutes into complex compounds that perform a variety of signalling functions in higher organisms. This volume is devoted to the polar lipids and their constituents. We have omitted the neutral lipids like fats and oils because their function is generally to act as deposits of metabolizable substrates. The sterols are also outside the scope of the present volume and the reader is referred to volume 28 of this series which is the subject of cholesterol. The polar lipids are comprised of fatty acids attached to either glycerol or sphingosine. The fatty acids themselves constitute an important reservoir of substrates for conversion into families of signalling and modulating molecules including the eicosanoids amongst which are the prostaglandins, thromboxanes and leucotrienes. The way fatty acid metabolism is regulated in the liver and how fatty acids are desaturated are subjects considered in the first part of this volume. This section also deals with the modulation of protein function and inflammation by unsaturated fatty acids and their derivatives. New insights into the role of fatty acid synthesis and eicosenoid function in tumour progression and metastasis are presented.