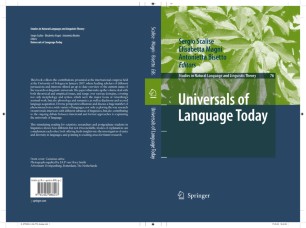 This book collects the contributions presented at the international congress held at the University of Bologna in January 2007, where leading scholars of different persuasions and interests offered an up-to-date overview of the current status of the research on linguistic universals. The papers that make up the volume deal with both theoretical and empirical issues, and range over various domains, covering not only morphology and syntax, which were the major focus of Greenberg’s seminal work, but also phonology and semantics, as well as diachrony and second language acquisition. Diverse perspectives illustrate and discuss a huge number of phenomena from a wide variety of languages, not only exploring the way research on universals intersects with different subareas of linguistics, but also contributing to the ongoing debate between functional and formal approaches to explaining the universals of language. This stimulating reading for scientists, researchers and postgraduate students in linguistics shows how different, but not irreconcilable, modes of explanation can complement each other, both offering fresh insights into the investigation of unity and diversity in languages, and pointing to exciting areas for future research.