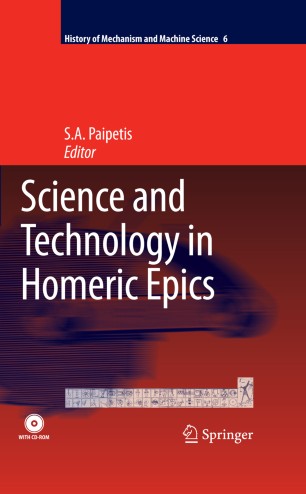 Science and Technology in Homeric Epics

Part of the History of Mechanism and Machine Science book series (HMMS, volume 6)

In the Homeric Epics, important references to specific autonomous systems and mechanisms of very advanced technology, such as automata and artificial intelligence, as well as to almost modern methods of design and production are included. Even if those features of Homeric science were just poetic concepts (which on many occasions does not explain the astonishing details of design and manufacture, like the ones included in the present volume), they seem to prove that these achievements were well within human capability. In addition, the substantial development of machine theory during the early post-Homeric age shows that the Homeric descriptions were a kind of prophetic conception of these machines, and scientific research must be a quest for the fundamental principles of knowledge available during the Late Bronze Age and the dawn of the Iron Age.

Such investigations must of necessity be strongly interdisciplinary and also proceed continuously in time, since, as science progresses, new elements of knowledge are discovered in the Homeric Epics, amenable to scientific analysis.

This book brings together papers presented at the international symposium Science and Technology in Homeric Epics, which took place at Ancient Olympia in 2006. It includes a total of 41 contributions, mostly original research papers, covering diverse fields of science and technology, in the modern sense of these words.