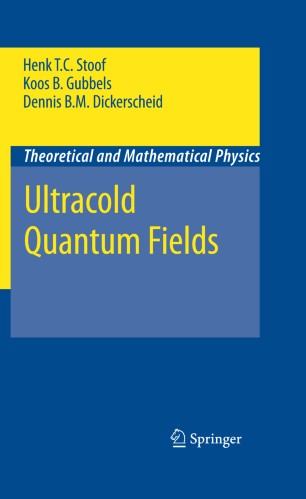 Ultracold Quantum Fields provides a self-contained introduction to quantum field theory for many-particle systems, using functional methods throughout. The general focus is on the behaviour of so-called quantum fluids, i.e., quantum gases and liquids, but trapped atomic gases are always used as an example. Both equilibrium and non-equilibrium phenomena are considered. Firstly, in the equilibrium case, the appropriate Hartree-Fock theory for the properties of a quantum fluid in the normal phase is derived. The focus then turns to the properties in the superfluid phase, and the authors present a microscopic derivation of the Bogoliubov theory of Bose-Einstein condensation and the Bardeen-Cooper-Schrieffer theory of superconductivity. The former is applicable to trapped bosonic gases such as rubidium, lithium, sodium and hydrogen, and the latter in particular to the fermionic isotope of atomic lithium. In the non-equilibrium case, a few topics are discussed for which a field-theoretical approach is especially suited. Examples are the macroscopic quantum tunnelling of a Bose-Einstein condensate, the phase dynamics of bosonic and fermionic superfluids, and their collisionless collective modes.

The book is based upon the notes for a lecture course in the masters programme in Theoretical Physics at Utrecht.

“The book offers a substantial and self-consistent introduction into this exciting and challenging subject of present day research. … Important items in basic quantum theory … fine and hyperfine spectral structure, are presented in a new way. … Most appreciable in this essentially theoretical text is the continuous correspondence with events from the laboratories: actually by the extended bibliography laboratories get very close to the reader.” (Bassano Vacchini, Zentralblatt MATH, Vol. 1177, 2010)

“The book has evidently been put together with great care and is very well written. It provides detailed textual explanations to guide the reader through the equations, and includes the intermediate steps in derivations. … found friendly and understandable by students including, in many cases, senior undergraduates. … It is pleasure to commend it warmly to those entering, teaching or working in the burgeoning field of ultracold atomic gases as well as in many-particle physics more generally.” (Peter V. E. McClintock, Contemporary Physics, Vol. 52 (2), 2011)