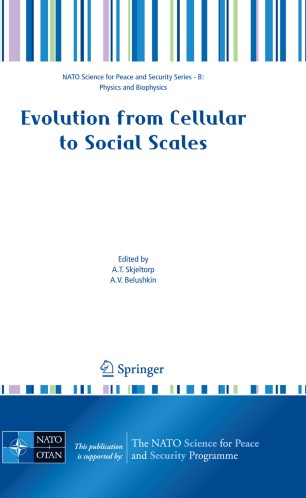 Evolution is a critical challenge for many areas of science, technology and development of society. The book reviews general evolutionary facts such as origin of life and evolution of the genome and clues to evolution through simple systems. Emerging areas of science such as "systems biology" and "bio-complexity" are founded on the idea that phenomena need to be understood in the context of highly interactive processes operating at different levels and on different scales. This is where physics meets complexity in nature, and where we must begin to learn about complexity if we are to understand it. Similarly, there is an increasingly urgent need to understand and predict the evolutionary behavior of highly interacting man-made systems, in areas such as communications and transport, which permeate the modern world. The same applies to the evolution of human networks such as social, political and financial systems, where technology has tended to vastly increase both the complexity and speed of interaction, which is sometimes effectively instantaneous. The book contains reviews on such diverse areas as evolution experiments with microorganisms, the origin and evolution of viruses, evolutionary dynamics of genes and environment in cancer development, aging as an evolution-facilitating program, evolution of vision and evolution of financial markets.