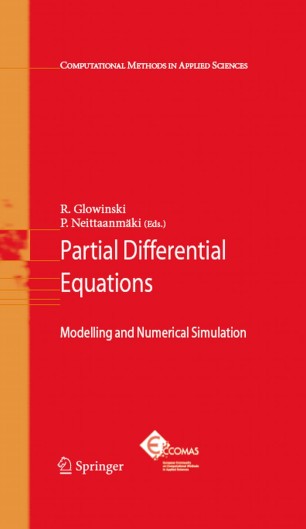 This book is dedicated to Olivier Pironneau.

Mathematical modeling methods based on partial differential equations form an important part of contemporary science and are widely used in engineering and scientific applications. In this book several experts in this field present their latest results and discuss trends in the numerical analysis of partial differential equations. The first part is devoted to discontinuous Galerkin and mixed finite element methods, both methodologies of fast growing popularity. They are applied to a variety of linear and nonlinear problems, including the Stokes problem from fluid mechanics and fully nonlinear elliptic equations of the Monge-Ampère type. Numerical methods for linear and nonlinear hyperbolic problems are discussed in the second part. The third part is concerned with domain decomposition methods, with applications to scattering problems for wave models and to electronic structure computations. The next part is devoted to the numerical simulation of problems in fluid mechanics that involve free surfaces and moving boundaries. The finite difference solution of a problem from spectral geometry has also been included in this part. Inverse problems are known to be efficient models used in geology, medicine, mechanics and many other natural sciences. New results in this field are presented in the fifth part. The final part of the book is addressed to another rapidly developing area in applied mathematics, namely, financial mathematics. The reader will find in this final part of the volume, recent results concerning the simulation of finance related processes modeled by parabolic variational inequalities.