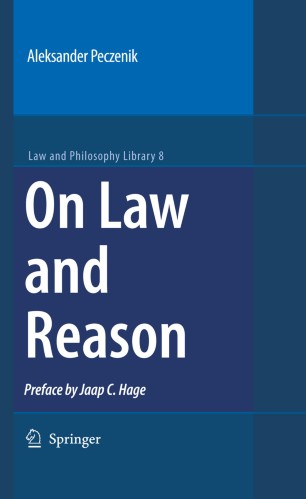 On Law and Reason

'This is an outline of a coherence theory of law. Its basic ideas are: reasonable support and weighing of reasons. All the rest is commentary.’

These words at the beginning of the preface of this book perfectly indicate what On Law and Reason is about. It is a theory about the nature of the law which emphasises the role of reason in the law and which refuses to limit the role of reason to the application of deductive logic.

In 1989, when the first edition of On Law and Reason appeared, this book was ground breaking for several reasons. It provided a rationalistic theory of the law in the language of analytic philosophy and based on a thorough understanding of the results, including technical ones, of analytic philosophy. That was not an obvious combination at the time of the book’s first appearance and still is not. The result is an analytical rigor that is usually associated with positivist theories of the law, combined with a philosophical position that is not natural law in a strict sense, but which shares with it the emphasis on the role of reason in determining what the law is. If only for this rare combination, On Law and Reason still deserves careful study.

On Law and Reason also foreshadowed and influenced a development in the field of Legal Logic that would take place in the nineties of the 20th century, namely the development of non-monotonic (‘defeasible’) logics for the analysis of legal reasoning. In the new Introduction to this second edition, this aspect is explored in some more detail.