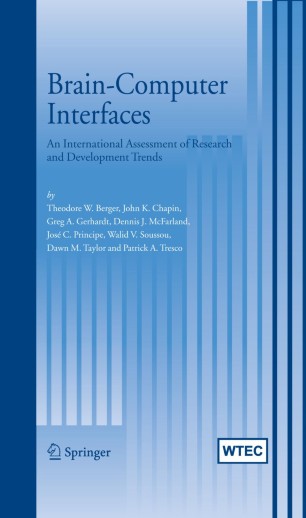 An International Assessment of Research and Development Trends

Brain-computer interface (BCI) research deals with establishing communication pathways between the brain and external devices where such pathways do not otherwise exist. Throughout the world, such research is surprisingly extensive and expanding. BCI research is rapidly approaching a level of first-generation medical practice for use by individuals whose neural pathways are damaged, and use of BCI technologies is accelerating rapidly in nonmedical arenas of commerce as well, particularly in the gaming, automotive, and robotics industries. The technologies used for BCI purposes are cutting-edge, enabling, and synergistic in many interrelated arenas, including signal processing, neural tissue engineering, multiscale modeling, systems integration, and robotics.

This WTEC study gathered information on worldwide status and trends in BCI research to disseminate to government decisionmakers and the research community. The study reviewed and assessed the state of the art in sensor technology, the biotic-abiotic interface and biocompatibility, data analysis and modeling, hardware implementation, systems engineering, functional electrical stimulation, noninvasive communication systems, and cognitive and emotional neuroprostheses in academic research and industry. The study also compared the distinctly different foci, range, and investment levels of BCI research programs in the United States, Canada, China, Europe, and Japan.