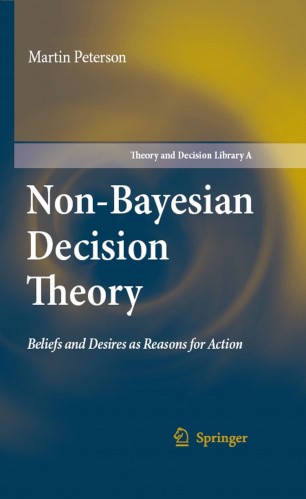 Beliefs and Desires as Reasons for Action

This book aims to present an account of rational choice from a non-Bayesian point of view. Rational agents maximize subjective expected utility, but contrary to what is claimed by Bayesians, the author argues that utility and subjective probability should not be defined in terms of preferences over uncertain prospects. To some extent, the author’s non-Bayesian view gives a modern account of what decision theory could have been like, had decision theorists not entered the Bayesian path discovered by Ramsey, Savage, and Jeffrey. The author argues that traditional Bayesian decision theory is unavailing from an action-guiding perspective. For the deliberating Bayesian agent, the output of decision theory is not a set of preferences over alternative acts - these preferences are on the contrary used as input to the theory. Instead, the output is a (set of) utility function(s) that can be used for describing the agent as an expected utility maximizer, which are of limited normative relevance.On the non-Bayesian view articulated by the author, utility and probability are defined in terms of preferences over certain outcomes. These utility and probability functions are then used for generating preferences over uncertain prospects, which conform to the principle of maximizing expected utility. It is argued that this approach offers more action guidance.