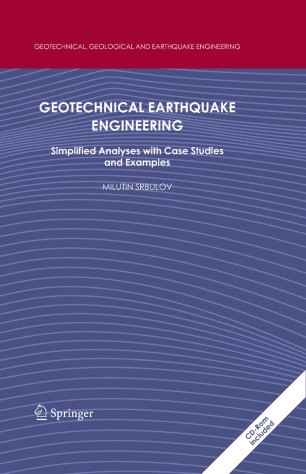 ... "Included on the Choice list with the outstanding academic Earth Sciences titles 2008" ...
This volume describes simplified dynamic analyses that bridge the gap between the rather limited provisions of design codes and the rather eclectic methods used in sophisticated analyses. Graphs and spreadsheets are included for the ease and speed of use of simplified analyses of:
soil slope (in)stability and displacements caused by earthquakes,
sand liquefaction and flow caused by earthquakes,
dynamic soil-foundation interaction,
bearing capacity and additional settlement of shallow foundations,
earthquake motion effects on tunnels and shafts,
frequent liquefaction potential mitigation measures.
A number of comments on the assumptions used in different methods, limitation and factors affecting the results are given. Several case histories are also included in the appendices in order to assess the accuracy and usefulness of the simplified methods. Audience
This work is of interest to geotechnical engineers, engineering geologists, earthquake engineers and students.