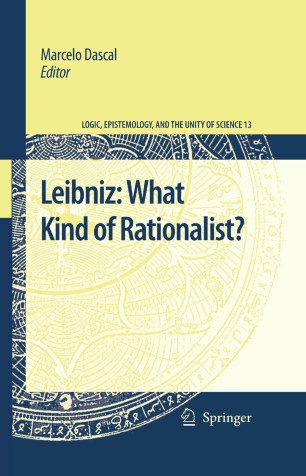 Leibniz: What Kind of Rationalist?

Part of the Logic, Epistemology, and The Unity Of Science book series (LEUS, volume 13)

Gottfried Wilhelm Leibniz was an outstanding contributor to many fields of human knowledge. The historiography of philosophy has tagged him as a “rationalist”. But what does this exactly mean? Is he a “rationalist” in the same sense in Mathematics and Politics, in Physics and Jurisprudence, in Metaphysics and Theology, in Logic and Linguistics, in Technology and Medicine, in Epistemology and Ethics? What are the most significant features of his “rationalism”, whatever it is?

For the first time an outstanding group of Leibniz researchers, some acknowledged as leading scholars, others in the beginning of a promising career, who specialize in the most significant areas of Leibniz’s contributions to human thought and action, were requested to spell out the nature of his rationalism in each of these areas, with a view to provide a comprehensive picture of what it amounts to, both in its general drive and in its specific features and eventual inner tensions.

The chapters of the book are the result of intense discussion in the course of an international conference focused on the title question of this book, and were selected in view of their contribution to this topic. They are clustered in thematically organized parts. No effort has been made to hide the controversies underlying the different interpretations of Leibniz’s “rationalism” – in each particular domain and as a whole. On the contrary, the editor firmly believes that only through a variety of conflicting interpretive perspectives can the multi-faceted nature of an oeuvre of such a magnitude and variety as Leibniz’s be brought to light and understood as it deserves.