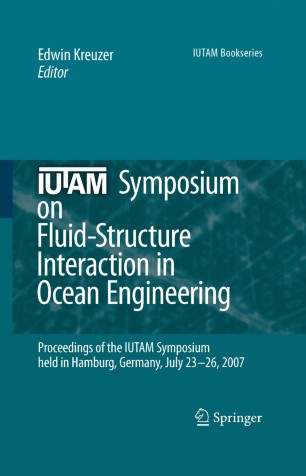 Proceedings of the IUTAM Symposium on Fluid- Structure Interaction in Ocean Engineering, held in Hamburg, July 23-26, 2007.

The study of gravity driven water waves interacting with fixed or freely floating objects is an active and important field of research in ocean engineering. The accurate prediction of large amplitude ship motions or of marine structures in severe seas is still a delicate problem in the field of fluid-structure interaction. While three-dimensional panel methods have reached the state of maturity in linear sea-keeping analysis, the original problem, governed by strongly nonlinear boundary conditions, is far from being solved efficiently. The principal nonlinearities are associated with the variable wetted surface of the ship hull or the floating body and with the nonlinear hydrodynamic conditions on the free surface. Moreover, marine structures often must be modelled as multibody systems rather than a single body. This causes additional problems due to wave slamming on floating and fixed structures. Furthermore, problems such as coupled structural behavior of submerged or floating systems as well as various wind effects have to be considered for the proper design of offshore systems.